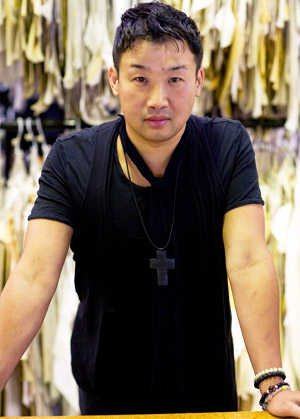 Takaaki Sakaguchi’s story began with a commerce student at University in Osaka,  Japan, sitting in a lecture  theatre sketching up innovative and adventurous designs.

Armed with degrees in both commerce and fashion design from Kinki University and Osaka Mode Gakuen, Takaaki then started his fashion career working for the giant Japanese fashion house Koshino, which boasts an annual turnover in excess of NZ$5 billion.

He quickly progresses to the position of Head Designer and Personal Assistant to the Managing Director. and held considerable responsibilities including much of the financial and sales operations of the company (Ayako Koshino)

During his time at Koshino, Takaaki regularly attended the biannual Paris Fashion Week. The experience at Koshino and the inspiration provided by the time in France sparked the dream of building his own fashion house. Soon after Takaaki made the move to his adopted Aotearoa

Sakaguchi, the brand began with a borrowed sewing machine in the spare room to Takaaki’s Christchurch flat in 1998. A store in Merivale quickly follow along with establishing and operation s base. Sakaguchi refined taste gained the immediate attention of the New Zealand media and became known among stylish women and the fashion industry. Takaaki went on to win several domestic awards.

During the 2003 Loreal New Zealand fashion week attracting well known buyers from NZ and around the world, Sakaguchi set the runway on fire with an immensely successful show.

In 2005, recipient of five awards at the American Express Collection & Awards, including best designer collection (a feat never accomplished before in NZ) Takaaki received more acclaim as a unique designer bringing aesthetic of his native Japan to a new environment and blending it create a new and exciting fusion.

In 2013 the label was introduced,this is a second diffusion of the classic Sakaguchi label that reflects a minimalist approach of simplistic styling with a chic sophisticated twist to create a distinctively unique and edgy  T style.

He is now a familiar face on judging panels for several high profile  national Fashion and Art awards.

Sakaguchi and T by Sakaguchi is currently stocked in all major cities throughout New Zealand and Australia and is proudly displayed alongside iconic international brands.